A couple of years ago, we were camping at Carpinteria State Beach, just south of Santa Barbara on a very crowded Thanksgiving weekend.

On Sunday morning, were waking up slowly, considering who was going to get up and make the coffee when, suddenly, we felt a hard jolt. Holy Crap! What was that! Did something just hit our trailer? 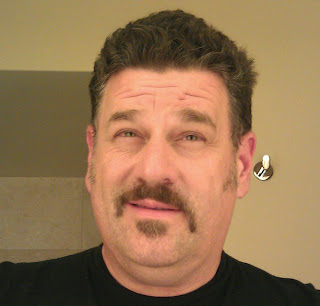 As a matter of fact, campers across the way were letting their teenage son practice maneuvering their humongous truck and humongouser ( I don't know if that's a word, but you get the idea) 5th wheel.

Well, sonny-boy certainly needed to learn some lessons, though doing it in a super-crowded, crushed-in-like-sardines campground was probably not the best place to practice. At least not until he had some basics down. Like "Don't hit other trailers!" Or even "Watch where you're going!"

That powerhouse smack into our funky little trailer opened a gash in the front right seam. Unfortunately, the parents of the kid driver were very aggressive and rude, as in "What do you want me to do about it?" And "Well, your trailer is pretty old anyway." Nice folks, huh?

We looked at the kid way up there in the humongous truck's cab and thought to ourselves..."What if that was our young man who made a mistake like this? We'd want everyone to have a little patience, right?"

We let them roll out without further incident. Frankly, the dad in the parental unit seemed more interested in bullying us than having a reasonable conversation about what sort of damage his son did to our little love machine. 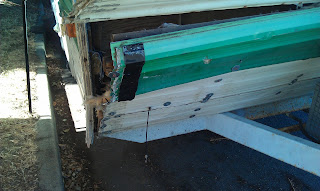 Bad move. That gash has been causing us grief ever since.

The reason I bring this up is that we're planning a 10-day camping trip up to Oregon this summer and we need the trailer to be in good, travelling shape. We hadn't really looked at the trailer since last fall...and the elements have been having their way with her. Plus, on the way home, the gash separated again (despite several previous attempts to repair) while Tom was on the freeway. He made it home but things didn't look good. 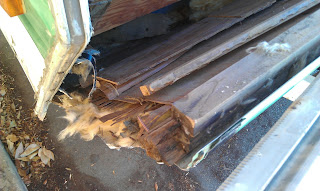 So, TrailerLuv Adventure to Oregonland prep just got a whole lot more complicated.

We'll share the repair story in hopes that it will help anyone else who gets smacked by a humongous truck driven by an inexperienced, nervous teenager whose dad is a putz.